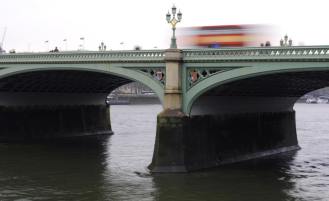 Earth has not anything to show more fair:

Dull would he be of soul who could pass by

A sight so touching in its majesty

Chester had wanted this moment since he first read the lines at fifteen years old. Wordsworth had spoken across two hundred years to touch the heart of a sensitive teenager in Cincinnati. Ten years later, he was walking the last few hundred yards to set foot on Westminster Bridge. Big Ben and the Houses of Parliament were on his right and he tried not to look at the modern monstrosity on his left.

No, he reminded himself, Big Ben was the bell in the clocktower, not the clocktower itself. It hadn’t been there when Wordsworth wrote Composed on Westminster Bridge. It was important to keep the facts straight. The locals would know things like that inside out. If he got it wrong, he’d be classed alongside the gawking culture vultures waving camera phones through the gate of the Houses of Parliament.

The river bank dropped away beneath him. He was standing on Westminster Bridge.

Open unto the fields, and to the sky

He knew the lines better than he knew the Pledge of Allegiance. The words ran through his soul in time with his footsteps. He gave himself to them, loving how right it felt to finally recite them where they were written.

Which is why he didn’t see the suited man walking toward him until their collision dashed his copy of Wordsworth’s collected poetry to the sidewalk. No, the pavement.

The tone left Chester in no doubt that ‘sorry’ meant ‘look where you’re going, you clumsy oaf’. Perhaps ‘oaf’ wasn’t the term the man had in mind, but it was a strong a word as Chester would allow to share his mind with Wordsworth.

In his first splendour, valley, rock, or hill

He made it to the middle of the bridge without touching anyone else. He’d only arrived in London last night, but he’d noticed that accidental contact was as grave a faux pas as breaking wind in an elevator. A lift. He loved the English words.

He leaned on the parapet, putting the crowds of pedestrians and the procession of buses and taxis behind him. This was the view that had inspired the lines. If he could ignore the giant Ferris wheel on the south bank, and the fact that Westminster Bridge had been demolished and replaced with this one some 60 years after Wordsworth composed his Composed.

He opened his collection to its most thumbed page and used it to drive his imagination. He faded glass and concrete to mist and looked across Southwark to the dome of St Paul’s, towering over the city’s houses and shops. He saw the masts of the ships moored downstream of London Bridge, and watched the wherries and lighters pass beneath him as they plied their trade with the barques and Indiamen in the world’s busiest harbour.

Ne’er saw I, never felt, a calm so deep!

The river glideth at his own sweet will

A crimson powerboat tore a white streak across his imagination. The roar of its outboard engine mingled with the delighted screams of its passengers.

“What would you have made of this?” Chester murmured.

The shade of William Wordsworth had nothing to say.

And all that mighty heart is lying still!

Is there a poem or a work of prose that you would like to follow as Chester followed Composed on Westminster Bridge?

Earth has not anything to show more fair:

Dull would he be of soul who could pass by

A sight so touching in its majesty:

The beauty of the morning; silent, bare,

Open unto the fields, and to the sky;

All bright and glittering in the smokeless air.

In his first splendor, valley, rock, or hill;

Ne’er saw I, never felt, a calm so deep!

The river glideth at his own sweet will:

And all that mighty heart is lying still!