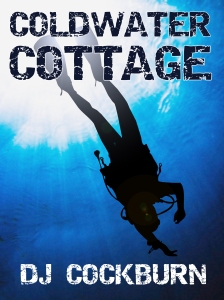 The flashlight went out.

That was odd; he’d charged the battery and the bulb was fairly new. There was no need to panic, there was a light on his buoyancy jacket. Not as powerful as the flashlight, but it would give him enough light to get out of here. There was no need to panic. The fingers of his left hand closed, and Ian knew he had dropped the box. His right hand found the large switch on the spare light, which had been thoughtfully designed so Ian could find it in the dark while wearing gloves. He felt the switch click. Nothing. He jerked the switch back and forth but the light was dead. He felt the check of the regulator as his breathing threatened to accelerate out of control.

Calm down, he told himself. Think. There should be a faint light from the window, but Ian’s eyes were still too used to the flashlight to make it out. Not that he could get through the window with the tank on his back. That left the door he had so carefully closed, which was behind him and to his right. Or was it to his left? If he could find the wall behind him, he could grope for the handle. He flicked a fin. His co-ordination betrayed him and his shoulder bumped the wall — or was it the floor or ceiling? — against his shoulder. He was disorientated, and now he’d have to search the whole room. He angled the backlit face of his dive computer toward his air gauge. It gave him just enough light to see the needle. Seventy bars wasn’t much to get out of this room, get out of the house and ascend twenty meters slowly enough to avoid the bends, but it was possible if he kept his breathing under control and didn’t panic.

The dive computer went out.

Ian froze and pressed his hand to the ache in his head. The voice had sounded as though it came from inside his skull, as if he’d spoken himself.

Next week: The Past

The full story is available from the Amazon Kindle store, and is part of the Steel in the Morning collection which is available in Kindle or paperback format.

Coldwater Cottage was originally published in Lamplight 1:2 and subsequently in the Lamplight Volume 1 annual.

Steel in the Morning