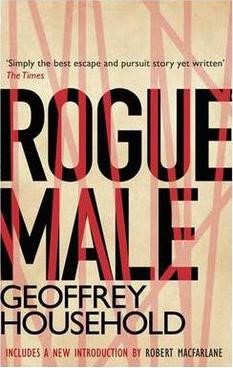 I distrust patriotism; the reasonable man can find little in these days that is worth dying for. But dying against – there’s enough iniquity in Europe to carry the most urbane or decadent into battle.

No, that’s not a Brexit manifesto. Geoffrey Household wrote Rogue Male in 1939, when it would have been hard to argue with. The sentiment is jotted down by the unnamed narrator – the eponymous rogue – while he’s in hiding from his various pursuers.

I must confess that I opened Rogue Male expecting a tale of Bigglesesque derring-do, so I was pleasantly surprised to find so much more than that. The premise is that the rogue was caught pointing a rifle at a central European dictator and, after torture and a narrow escape, is being pursued by the dictator’s agents. It was published a few months before Britain entered the Second World War and while either Household or his publisher evidently thought it wise not to name Adolf Hitler, the dictator is so obviously him that Rogue Male was reprinted in a Services & Forces edition to encourage the troops soon after Britain declared war.

Household gives us a hunt from the perspective of the prey, who is himself an experienced big game hunter and so is able to appreciate the thinking of the predators. The rogue flees for home but the closer to home he gets, the closer the hunters get to him. He is chased from the unnamed European country through cosmopolitan London into Dorset, a county whose quintessential Englishness is underscored by locals talking about how they ‘don’t ‘old with forriners’.

At one point, he is even pursued by the bloodhounds of the local foxhunt, becoming less man and more quarry with every chapter. He spends much of the second half of a novel hidden underground in his ‘burrow’, while the hunters quarter the county for the place to dig him out.

While Rogue Male starts with an attempted political assassination, it’s far more a psychological than a political thriller. As the pursuit narrows his world, the rogue becomes more honest with himself, and though his diary, with us, revisiting and discarding the rationalisations and the laissez-faire with which he presents himself in the early chapters. As his pursers allow him less and less room to manoeuvre in the physical world, so he allows himself less and less room to manoeuvre in the world of his own psychology and we see the turmoil behind his stiff upper lip.

Rogue Male shows the conceit of civilised man stripped away, layer by layer, and replaced by the instincts of a hunted animal. There is pain, there is fear but what the pursuers forget at their peril is that a hunted animal also has a ruthless cunning.